Looking back at the protest movements that defined a decade 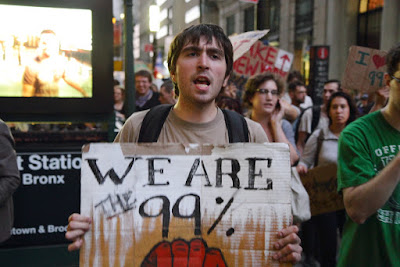 The 2010’s will likely be remembered as a flash point in American political history, the legacy of which will probably take at least another decade to fully understand. It’s a time period in which politics not only defined American life but fundamentally changed it. The very psyche of our nation has altered, and with it changed how we both react to our culture and interact with one another. A decade that began in the midst of two failing wars and the smoldering ruins of economic collapse, also saw massive social change, the emergence of celebrity politics, and violence in American streets. Here we take a look back at the movements that defined one of our most turbulent decades.

Still considered an unelectable taboo in politics during the 2000’s the fight for marriage equality blew open in the early 2010’s. As more states, began to recognize same-sex marriages national opinion quickly begins to change on the subject. Adding to the national discussion, then Vice President Joe Biden announced his personal support for same-sex marriage on an episode of Meet the Press, leading to President Barack Obama’s public statement of support in 2012. The Supreme Court would later make a constitutional case for marriage equality, enshrining it as the law of the land and one of the biggest civil rights victories of the 2010’s.

Beginning in the late 2000’s as a largely anti-tax, anti-war libertarian movement tied to Ron Paul’s candidacy for President, morphed into massive protest movement that far too often utilized racism in the wake of the election of America’s first black president. PAC’s and organized groups (often funded by the Koch brothers) utilized the energy of the movement and shed much of its original isolationist message instead turning it into a populist electoral force steeped in bigotry, conspiracy theories and ridiculous costumes. It culminated in the election of numerous right wing congressmen, and in many ways laid the groundwork for the election of Donald Trump in the second half of the decade.

The rise of Donald Trump to the Presidency was as certain to happen as it was unlikely. The billionaire reality TV star utilized a toxic mixture racism, xenophobia, raw anger and aspirational wealth to beat a crowded Republican field and one of the most well known political figures in the world for the Oval Office. His flirtations with fascism and authoritarian tendencies terrified many but created a solid, rabid base of voters in tiny red hats and inspired a wave of ugly factional politics, that rivals the worst of America’s political history.

The Return of Progressivism

While Trump developed his own cult of personality, the candidacy of Bernie Sanders did something else with the Democratic Party. A new wave of progressive Democratic candidates and activists emerged, no longer happy with the center-left politics of the New Democrats, the new progressives cover territory that ranges from Neo New Dealists to self described socialists. The momentum behind them has reframed acceptable political ideology in the nation with ideas like Single Payer Healthcare, Reparations, Jobs Guarantees and even Universal Basic Income all becoming mainstream.

The now annual Women's March first took place the day after Donald Trump's inauguration, a response to the horrifically sexist nature of his actions, statements and candidacy, it became the single largest day of protest in the nation’s history. Since then the organziers behind the march have been criticized for everything from their motives, to their connections to the Nation of Islam and allegations of anti-semetism despite this the marches continue, globally.

In 2018 Greta Thunberg launched her protest outside of the Swedish Parliament, calling for a national day of protest. The following year it kicked off a global movement with students walking out of schools, and faculty trying to figure out how to best accommodate the protest. It inspired countless other climate based protests and Thunberg was subsequently named Time’s “Person of the Year

March For Our Lives

Generation Z has time and again shown themselves as an activist generation rising to the challenges of their time in a way that Millennials were never able to during the Bush years. The March For Our Lives took place in 2018 and was organized and led by survivors of the Parkland shooting. It made survivors like David Hogg and Sarah Chadwick into recognizable faces and names and showed that the politics of this era would at least in part, be influenced by the young people policy would most directly affect.

While technically originating all the way back in 2003, the hacktivist collective Anonymous became a household name in the early 2000’s. Addressing a myriad of different issues reflecting political views across the spectrum, the group helped to uncover some of the crass underbelly of American political and corporate life while turning the Guy Fawkes mask into an instantly recognizable symbol of protest and political resistance.

In the 2010’s Neo-Nazi’s were more likely to look like an extra from a Brooks Brothers catalog then from American History X. The so called Alt-Right spread and organized online before becoming an open political force during the 2016 presidential election. Formed of various far right ideologies and groups, the movement represented much of the very worst of America. Defined by terms like white nationalism and western chauvinism the Alt-Right will forever be linked to both the Presidency of Donald Trump and the onslaught of physical violence that began to occur in American cities. The movement has begun to lose steam after the Unite the Right rally in Charlotteville where violence shut the city down and claimed the life of counter protester Heather Hayer. The movement will hopefully be seen in the future as the dying gasp of America’s past sins however now it is an unfortunate and dangerous reminder that hatred and authoritarianism are still very much alive in our nation.

A cultural moment that revealed a horror show of abuses by titans of industry, elected officials, and every day people. The ‘Me Too’ movement opened America’s eyes to the epidemic of sexual assault, harassment and general misogyny that almost everyone had encountered but no one spoke about. It forever changed the way we look at some of the most well known and previously beloved public figures of the 20th and 21st century and forced well overdue conversations about consent.

Following the death of Trayvon Martin, a child shot to death essentially for being black and wearing a hoodie, a seemingly unending protest movement was born out of a hashtag. Forcing attention on racism and police brutality, Black Lives Matter was targeted and criticized by conservative media and pundits who often attempted to use racist stereotypes and dog whistles to incite backlash against the movement. The movement was met with counter hashtags and statements such as ‘Blue Lives Matter’ and ‘All Lives Matter’ that sought ot minimize the racial component related to police brutality and the murder of black men by police in American. Violent clashes between police and protestors in Ferguson, as well as NFL player Colin Kaepernicks on field protests kept attention on the movement while also changing the framework in which it was discussed.

Images from Wikimedia Commons
at January 02, 2020