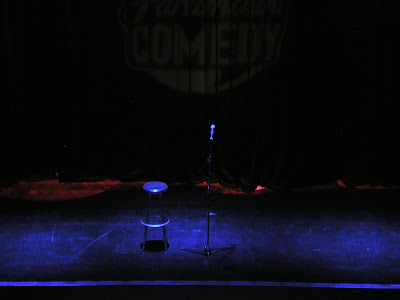 My friend recently recounted a story to me in which a man at a bar aggressively hit on her, despite her multiple attempts at very clearly telling him she was not interested. As this happened, another gentleman watched from afar and waited to approach my friend until after the transgression was over. In one breath, this new gentleman asked her if was she okay and also could he please buy her a drink.
Not knowing how to respond to this absurd and horrific level of disrespect, all she could do was laugh in his face. This reaction inspired him to hurl insults at her, essentially repeating the same scene from moments earlier with the previous gentleman, only now his ill intentions were covertly disguised under the mask of trying to be helpful.
I’m reminded of the Margaret Atwood quote, “Men are scared women will laugh at them. Women are scared men will kill them”. I think about this quote a lot when men in the comedy world complain about not being able to make rape jokes anymore. According to this thinking, it is only okay to laugh at men’s disrespect of women when the men are telling the joke, but not when the disrespectful man IS the joke. If you have to tell your audience which parts are funny, are you even doing comedy right? Do you even get it? Can you not see that censorship is ruining comedy, bro?
Recently, comedian Dave Chappelle bravely came forward and revealed that he too, was critical of #metoo. It is truly empowering to see these courageous, rich men are finally speaking their truth using the platform they have literally always had since the beginning of time. Chappelle hilariously asks, “What the f—k is your agenda, ladies?” and you have to admit he does have a point. Between shopping, chanting, “kill all men” in unison while braiding one another’s hair, and seeking justice against our abusers, what IS our agenda, ladies? When you stop and think about it, it is pretty obvious: fortune and fame, duh!
Personally, I was going to buy a Birkin bag with my #metoo money. And then I was going to get a merken to match my Birkin, because this is f-e-m-i-n-i-s-m and we like our pubes extra long around these parts. Pubic hair wigs: better get used to it, fellas. Time’s up.
It is so ironic that these men who are critical of the #metoo movement are also huge free speech advocates (read: rape joke tellers). Whenever they complain, I picture a meme of a dog saying, “free spech, betch!” (intentionally misspelled for affect). I imagine this dog would wheel away on a skateboard, having just evoked both the b-word and the first amendment, indicating infinite levels of supreme coolness and power over women. If the lowest form of comedy cannot accurately express how I feel, then was I even raised by the Internet at all? If I can’t share this Overly Attached Girlfriend meme that reuses the same tired joke about a woman being “crazy”, then do I even understand humor? Ladies, you need to lighten up. Listen, I know this hilarious joke about you making a guy a sandwich. Just kidding, it is actually about rape. You are going to love it. And if you don’t, well, I’m going to make an entire comedy special dedicated to the fact that you don’t find this joke funny anymore.
Maybe Atwood had a point, maybe men really should fear that women will laugh at them. Honestly, Chappelle’s new special bored me to tears. He’s been out of the comedy world for several years, and maybe for good reason. He’s literally wearing a jumpsuit with his name on it so that we don’t forget who he is. All I see is a sad man’s desperate attempt at trying to stay relevant by supporting his rapist buddies. And frankly, that’s hilarious.

Hannah Yeun is a florist, musician and occasional funny person based out of Tucson, Arizona. She is also the founder of Electric Witch, which is a series of music, gear and live performance workshops taught by womxn. @electricwitchworkshops @hannahyeunmusic Find her on twitter @hannahyeun
at October 03, 2019