Democrats are Centering 2020 on Big Ideas 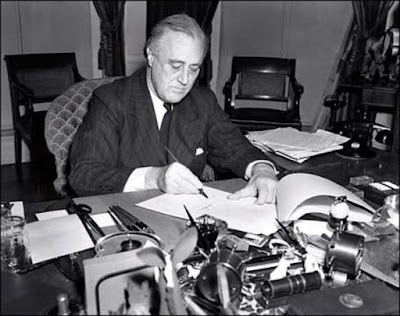 As more candidates continue to officially enter the Democratic Primary, the race is becoming increasingly one, that is defined by big ideas, calls for expensive new programs and radical change.

The earliest entrants to the race are defining themselves not by their years of service and experience (or in the case of several, lack of both) but by calls for bold, progressive policies.

While the Democrats pivoted towards centrist politics and more moderate policies in the later decades of the 20th century, the party was arguably at it’s strongest when it ran Presidential candidates who argued for large culture shifting ideas. Programs like Roosevelt’s New Deal and Johnson’s Great Society defined a new version of American exceptionalism that came to shape how not only the American public’s perception of the Democratic Party but their perception of them selves.

Universal Basic Income – Possibly the most radical proposal of the 2020 cycle comes from businessman Andrew Yang of New York. Yang has centered his campaign on the promise of giving (almost) every American $1000 a month, no strings attached. The policy might shock most Americans when they first hear it, but Yang’s become incredibly apt at making his UBI proposal sound not only rational but necessary. Time will tell if it resonates with enough of America to push Yang to victory but it’s guaranteed to make waves on the debate stage.

Universal Healthcare – The idea that healthcare should be a universally guaranteed right has been in discussion since the early 1900s, however until the 1980’s the idea wasn’t considered outside the mainstream of the Democratic Party. However, over the last couple of decades, the majority of party leadership advocated for alternative options and compromise policies like the much-maligned ‘Hillary-Care’ of the 1990s and more successfully the Affordable Care Act.

After Barack Obama’s successful 2008 run centered on expanding healthcare access and Bernie Sanders 2016 campaign made single payer one of its flagship issues, the party now seems ready to fully embrace the idea. All 11 of the non-perennial candidates in the race have come out in favor of some form of Universal Healthcare coverage, with a Single Payer Public Option being the most common position.

CNBC reports that 70% of the United States now supports Medicare for All. This formerly ‘radical’ position seems like a safe choice for Democrats stepping into a national light.

Tuition Free College – Another position that found traction with the rise of Obama and Bernie, (two and four years respectively) has become a hallmark of many 2020 Democrats campaigns. The exact approach differs candidate to candidate, Free Hugs Founder Ken Nwadike is advocating for two-year community college while Rep. Tulsi Gabbard is supporting a more expansive plan that would cover the whole cost of a four-year degree. Other candidates are using their current positions to push this issue forward now. Washington Gov. Jay Inslee has already taken steps to institute a plan, in his state, that would cover the costs of trade school, apprenticeships and undergraduate degree at public universities for those making less than $61,000 a year.

Slavery Reparations – Marianne Williamson has made a $103 billion slavery reparation package a central part of her campaign messaging. In a video posted to her social media profiles, she explained the specifics of the policy, advocating for an appointed board of African American civil leaders who would administer the funds to a series of community empowerment projects as opposed to giving the funds directly to individuals. Reparations have been discussed since the end of slavery however it is not something that has been seriously pursued as a policy agenda item since Abraham Lincoln.

Although, Native American’s have received some reparations for past broken treaties and President Reagan, signed into law a bill that provided $20,000 in reparations for Japanese Americans who were interred during the Second World War.

Minimum Wage - A legacy of FDR raising the minimum wage has long been a Democratic goal, and it’s always been difficult to find many elected Democrats who were flat out against the idea. The trend prior to recently, however, had focused on small and gradual raises to the wage, however, and been plagued by inaction from Democratic leaders. The popularity of the Fight for $15 movement, however, has pushed this to the forefront, and almost ever Democratic candidate has made some statement about moving toward something resembling a living wage.

Legalization of Marijuana – Once considered a disqualifying taboo legalizing pot has become a rallying cry for Democrats running for president. Yang and Gabbard are both calling for the legalization of marijuana. As is former West Virginia State Sen. Richard Ojeda and Sen. Kirsten Gillibrand of New York.

Jay Inslee not only governs a state that has already taken this step but recently pardoned thousands of people convicted of marijuana crimes. And other contenders like Sen. Elizabeth Warren and former HUD Secretary Julian Castro have been speaking out about the destruction marijuana prohibition has caused.

The early stages of the 2020 Democratic Primary show a party that's not just changing course but in some way's reversing it entirely, back to a party based on bold, society-changing ideas. And electorally that could be a very good thing


Alex Kack is the editor of 'Spooky News' and the Bull Moose Review'. He is a political advocate, writer and comedian currently based in Washington D.C. where he lives with his girlfriend and their excessive number of pets. Follow him on Twitter here: @Alex_Kack