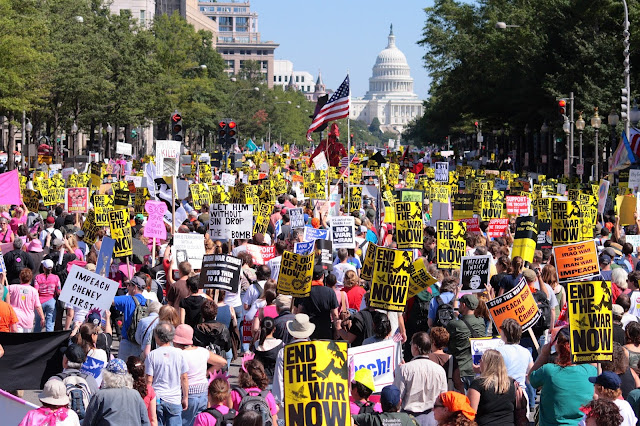 A lot of people are freaking out about Donald Trump being in the White House. Good, they should be. However as we watch the limits of democracy tested almost daily by the mix of corruption, demagoguery, and corruption we see coming from the administration we've started to forget exactly how bad things were just a little over a decade ago.

It was a vastly different time, obviously. There are people currently attending college with no memory of 9/11. Same for Ralph Nader, hanging chads, shock and awe or failing levies in New Orleans. Even for older generations everything seems distant. It's easy now for people to look at George Bush and see an aging rhinestone cowboy with a watercolor set. Just a rich kid from Texas who got in over his head, I mean he couldn't even run a baseball team, right? What did we expect?

Still the America we live in is very much his. He condemned Donald Trump, but he is his legacy. A wrecked economy, flaring racial tensions, mass surveillance, unchecked executive privilege, disregard for the constitution he swore an oath to before he brought us war with out end.

It was a different time.

Very few thing's capture the way a time period feel's like music. Songs capture the national mood, especially when that mood is anger and despair. In case anyone needs to remember over the next four years how to do that, here's nine songs from the last time everything felt broken.

1) Connor Oberst – “When the President Talks to God”
In 2005 George Bush stated that God told him to invade Iraq. In 2005 Connor Oberst released this song. Oberst had already made a name as an indie-folk darling with his main project Bright Eyes. But it's hard to think about his career with out touching on this solo single. It stands to this day as Oberst's most forward political statement, a reaction to an evangelist president who spoke of compassionate conservatism while overseeing a war that killed hundreds of thousands of people. The song questioned Bush's honesty and his sanity, something that majority of the country seemed to be doing as well.

NOFX - “Franco Un-american”
Punk rock has always been political. 90's skate-punk veterans NOFX, had almost never been political. That all changed in 2003 with the release of their ninth studio album 'The War on Errorism'. Truthfully almost anything off the album would fit but 'Franco' deals with the idea of having a political awakening in the midst of political disaster. Lead singer 'Fat Mike' Burkett's lyrics humorously look at the desire to do something, anything to help. That desire lead to Burkett creating PunkVoter an effort that tried to use music to organize young people to vote in the 2004 election, they also printed those really snazzy “Not My President” t-shirts that you can still find floating around the internet.

Key Lyric: “I never looked around, never second-guessed
Then I read some Howard Zinn now I'm always depressed
And now I can't sleep from years of apathy
All because I read a little Noam Chomsky”

Immortal Technique – “Bin Laden”
New York rapper Immortal Technique built his brand on political extremism and his 2005 song featuring Mos Def and Jadakiss is no exception. The song makes blistering points about everything from mass surveillance to the CIA's past backing of Osama bin Laden before delving into conspiracy theories about 9/11 being an inside job. Tin foil hat aside this song is still a jam and it's a good reminder in today's climate that bat shit conspiracies weren't always exclusively a right wing thing.

Bloc Party – Helicopter
U.K. band Bloc Party came onto the American scene in 2005 in a big way with their album 'Silent Alarm'. The single Helicopter actually had nothing to do with Bush, with their lead singer actually going as far as to say that had written the song about himself, still the song wound up taking on a life of it's own as a protest song. Stateside people heard lines about brash Americaness and instantly believed it to be a critique of the Ugly American from across the pond. Looking at the lyrics it's not hard to see why people felt that way. Full of disapproval about fast food, other American staples, whatever the original intention it became a staple of the Anti-Bush musical canon, reminding us that that for a couple years in the mid 2000's everything was political, even critiquing yourself.

Key lyric: “Stop being so American There's a time and there's a place
so James Dean, so blue jeans, gonna save the world, he's gonna”

Public Enemy – Son of a Bush
Once referring to hip-hop as “CNN for black people” rapper Chuck D's biting critique of social and political issues built Public Enemy into a massive hit in the late 80's and early 90's before fading away into the hip hop back drop by the end of the decade. The only pre-iraq song on this list, 'Son of a Bush' came out in 2002 to help restore the group's relevance right before member Flava Flav diminished it again by becoming a reality TV star. Like every thing ever released by PE this track is full of righteous anger that also happens to be incredibly informative. Chuck tackles a variety of issues on the song including Bush's past cocaine use, the insane number of executions that Bush over saw during his time as Governor of Texas all under the context of his father's legacy.

Against me! - From her lips to gods ears (The Energizer)
Against Me! Might be the quintesential Anti-Bush band. Their 2005 album 'Searching for a Former Clarity' retained the political edge of their previous albums but narrowed the focus. 'From her lips' takes on Condoleeza Rice who had taken over for a recently resigned Colin Powell as Secretary of State. It also could get a crowd of angry kids moving. Despite the songs bleak outlook, it was still fun and unlike most of the other songs on this list it doesn't sound out of date today.

Kay lyric: “Democratic election under Marshall law.
An Iraqi president out of control of our choices.
After all this death and destruction
Do you really think your actions advocate freedom?”

Eminem – Mosh
Eminem had never been a stranger to controversy, however it'd be almost impossible to say he had made any form of political statement prior to releasing 'Mosh' in October of 2004. The cartoon video was distributed for free online in an attempt to get young fans to vote against Bush that November. The video was actually pretty cutting edge for it's day, and included scenes ending with an angry mob of Em's fans marching towards a building, where they simply go in to peacefully vote. Unfortunately for the world Eminem's fan base didn't turn out to be enough put John Kerry in the White House but they did help keep ths ong fairly regular rotation for months following the election.

Mos Def – Dollar Day (Katrina Clap)
Hurricane Katrina was a horrific natural disaster, the response to it by Bush's White House was a horrific man made one. Rapper Mos Def had made his displeasure with Dubya well known in a number of songs prior to releasing 'Dollar Day' but it was this song that probably best expressed his frustration with a President who failed to heed warnings and left a whole city to rot.

Key Lyric: “Listen, homie, it's Dollar Day in New Orleans
It's water water everywhere and people dead in the streets
And Mr. President he bout that cash
He got a policy for handlin the n****z and trash”

Green Day – American Idiot
It would be literally impossible to end this list with any other song. There were mixed reactions to Green Day's 2004 pop-punk opera concept album about life in the new America that had formed under Bush after 9/11. No one however can really deny it's legacy in the larger history of American protest music though. The green splattered music video hit the air waves and showed people that tthings were fucked up enough that even a band who had previously named an album “Dookie” weren't kidding around anymore. And most importantly it served as a gate way drug for disenfranchised young kids across the country who began to seek out political activism. Over a decade since it was released the lead single is still a staple on both alternative rock and pop radio stations and has since been adapted into a Broadway musical.

Key Lyric: “Well maybe I'm the f*ggot America
I'm not a part of a redneck agenda
Now everybody do the propaganda”

This isn't a song but he said what we were all thinking right?

Alex Kack is the editor and founder of the 'Bull Moose Review' as well as 'Spooky News'. He is a political advocate, writer and comedian currently based in Washington D.C. where he lives with his girlfriend and their excessive number of pets. Follow him on Twitter here: @Alex_Kack He's on Tumblr here: alexkack.tumblr.com