Let's Talk About Economics and Immigration 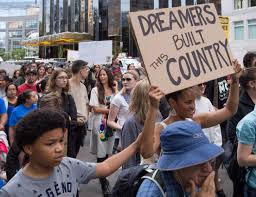 Photo by Rhododendrites via Wikimedia Commons, Article republished from The Free Cities

Long time no talk. My day job (which some people would probably allege doesn’t exist cuz I’m a freeloading liberal cashing those George Soros protester checks!) has kept me busy. But my internal rage against the GOP for being goddamned liars every second of every day has built to a breaking point where I have to take time out of my — again, very real — busy day to address some of the bullshit permeating the national discourse.

Given that we’ve already shut down the government once over DACA and the status of the so-called DREAMers, and given that we’re barreling toward another government shutdown over the exact same fucking thing  — it’s time to dispel with a bunch of bullshit that white people writ large and the GOP writ small have been selling for years about immigration.

One of the biggest criticisms of Democrats is that we somehow don’t talk about economics enough. This is odd given that the 2 biggest economic boom cycles of the last 40ish years happened under Democrats, given that the economic numbers Trump constantly crows about are the result of Obama’s economic policies, etc etc. In a very real and documented way, everything we talk about comes back to economics. This might shock you, but preventing trans people from getting the shit beat out of them makes them more productive at work. Funding college education creates higher wage-earners, which is good for the economy! I promise! Joe Kennedy literally delivered the SOTU response from an auto shop in Fall River, one of the “forgotten” parts of “Forgotten America” that was allegedly forgotten by us coastal liberal elites.

But what I really want to talk about is the economics of trade and the economics of immigration. Because most of what the GOP is spewing on this front is reactionary, revanchist, and utter and complete bullshit. And it really doesn’t take a PhD in economics to figure this out (although Paul Krugman has one, so there’s that). Trade and immigration policy is one place where the politics of it are actually zero-sum, unlike the social bullshit that the GOP lives and dies on.

There are demographic realities of American populations. We’re currently dealing with the baby boomers aging out of the workforce and into retirement. That creates a problem with pension funds (many of which are federally guaranteed), social security (which the GOP continues to de-fund out of spite), and other government programs. First off, I won’t call these entitlements because everyone with a job pays social security taxes. Calling them entitlements is like me calling a meal I paid for an “entitlement.” Sure, I am entitled to get the thing for which I have paid money. Anyway, unless we start just breeding more white babies (a suggestion that the GOP is shockingly close to floating in actuality), we need young able-bodied workers to come here, take jobs, and contribute taxes.
Enter, the DREAMers.

You want a fucking economic argument for DREAMers? 92% of them are either employed or in college (keep in mind in economic terms, 5% of the population is always entering/leaving the workforce, so 92% is very close to full employment). Further, the DREAMers pay income taxes because they have actual jobs. Even further, we make them pay a fee for being DREAMers. They are pouring money hand over fist into federal coffers — more money than a non-DREAMer American in the same situation. Whether you like it or not, if old white Americans watching Fox News want to keep the programs they rely on solvent, it’s gonna be young brown and black people who came here legally (TPS status) or illegally (DREAMers) paying for it.

I’m sorry — I really am — that coal isn’t market competitive as an energy source. I’m sorry that Trump promised you that your sweet 85k a year job that didn’t require a college degree and came with a pension (a pension, mind you, that Democrats have fought to preserve, not Mr Fucking Wore A Coal Hat once) isn’t coming back. You know who supported job re-training in Appalachia? Obama. You know who gutted it? Trump.

We need young able-bodied people to come here and work. And by the way, they’re not taking your fucking jobs. Unemployment is at its lowest level in 40 years. We’re now above full employment in economic terms. If you think immigrants are taking your jobs, maybe it’s because you don’t want to work in the service industry (where a lot of the new jobs are being created). But I live in overrun-by-immigrants Communist-hellscape Los Angeles, and there are so many fucking “Now Hiring” signs in so many fucking windows. Sure, those jobs might not be as sexy as coal mining or auto manufacturing (although California has Tesla headquartered here). But if you don’t want those jobs at those wages, it’s not the employer’s fault (okay, there’s a longer minimum wage argument to be had, but guess who supports higher minimum wage? Democrats!).

I don’t support open borders. I think there’s a longer-term argument to be made for them (we only have 2 borders! Creating a trade zone like the EU in North America would be pretty fucking easy!). But I’m also a (((globalist))). In the interim, we as a nation have to deal with the very real demographic realities of Traditional Americans (TM) having fewer babies, getting older, retiring, and creating a problem in terms of taxation, in terms of spending, and in terms of what jobs exist and for whom they exist.

And those realities terrify the White Nationalist part of our country. But guess what? A bunch of brown kids in Arizona are still Americans. Just because one day your grandson (or son the way we’re moving) will be the low-skill worker on a dock whose college-graduate supervisor is the son of undocumented workers? That’s on you, not them. We as a nation strive to give everyone the same opportunities to succeed. We’ve spent the past 250 years giving white people (and white men specifically) a staggering advantage. Watching that advantage slip away is going to be tough. Living in a world where your kid doesn’t start out fifty steps ahead in a 100-step race is gonna suck for you.
But locking down the border, rounding up DREAMers in ICE raids, deporting pillars of the community for some misdemeanor infraction 20 years ago…these aren’t solutions.

These are symbolic moves by a racial group that’s rapidly losing its grip on the power structures of America. I promise you, white people, that if your kid is still smart and raised in a middle class family, they will still have every opportunity to be successful. But so will the Latinx kid next door.

We need to stop pretending that we can rebuild 1950s America. It doesn’t work. And we need to stop acting as though there’s some inherent value in whiteness. That we alone can tell the story of America. America was founded as a set of ideals, not as an ethnicity, not even as a geographical place. Admittedly, we’ve fallen short of that ideal over and over and over. But we shouldn’t be punishing people seeking that ideal, contributing to that ideal every day, trusting in that ideal. The skin tone of our country should never have defined us. We’re locked in an ideological battle now over whether it does or not.

But please understand that this fight is economic as much as it’s social.