An Interview With Artist and Activist Karen Fiorito 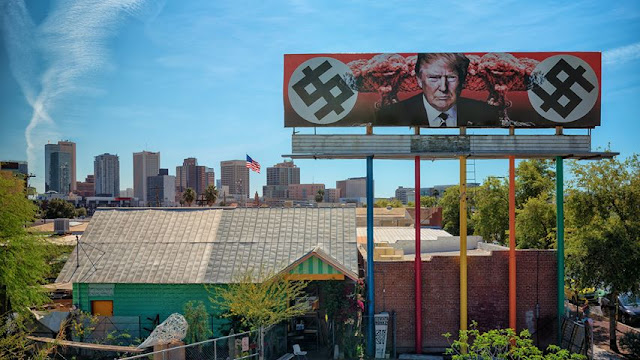 Republished with permission from the Arizona Daily Sun

Earlier this year in March, in the wake of a contentious presidential election, a billboard was installed in the downtown Phoenix area. Its depiction of a surly Donald Trump surrounded by nuclear mushroom clouds and dollar signs bearing a deliberate resemblance to swastikas caught the attention of drivers making their way down busy Grand Avenue. It was a statement made by artist and activist Karen Fiorito that brought both positive and negative reactions from the public, including notice by national news media.

The Santa Monica-based artist is no stranger to controversy though. She has created art speaking out against politicians on the right and FOX news for many years, demanding attention to issues she feels are important. A series of billboards that have been installed throughout California and Phoenix highlights drought and how animal agriculture is a large contributor.

Some of her less obvious politically-framed works show animals as sacred beings through imagery borrowed from Buddhism and Hinduism. As a vegan, Fiorito is an advocate for animal rights and how veganism is beneficial to a healthy environment.

“I believe all beings are worthy of compassion and love, and in order for the planet to survive, we need to find that compassion for ourselves, the Earth and all of the creatures who are an integral and interconnected part of our ecosystem,” she writes in the artist statement on her website [www.karenfiorito.me].

The artist has had to change her home phone number due to receiving death threats and was hesitant to give it out again, so the following interview was conducted over email.
MC: In your words, what’s the connection between art and activism?
KF: Art has always been political. Art has been used as a propaganda tool for those in power across cultures and historical periods. Artists have always reacted and responded to the current events and politics of the day. Whether commenting on war, famine, religion or culture, artists have always lifted a mirror to society. Artists also cannot become untangled from their zeitgeist, so culture and politics play a major role in artists lives, as they always have from the beginning of the history of art. Art can play a positive role in society by engaging the public, opening dialogues, and enlightening and uplifting people, although it is not often used that way.

Remember, "Art for Art's Sake" is a modern phenomenon: Art has always served a purpose in society: first to pay tribute to the Gods, then to Royalty and now to Capitalism.

How long have you been using your art to make a statement?
Since I was a teenager. Art saved my life and allowed me to express myself in ways I never thought possible. As far as being overtly political, I started making "political" art during my undergraduate years and continued into graduate school. I stopped making overtly "political" for a while during Obama but was called upon to make a statement on the election results. I was making work about animals and animal agriculture's effects on the environment. These works are still political to me, just not as in-your-face.

The reaction to your ‘Trumpocalypse and Unity’ billboard since it went up earlier this year has been mixed, and even led to death threats and vandalism of the billboard—were you expecting this and how have you dealt with it?
Yes, I was expecting a violent reaction from the right: there always is to anything that challenges their belief system. Fox News and similar organizations have run articles on me intended to incite as much hatred and violence towards me as they do. I even made a video of some of the call I got accusing me of hate speech with photos of Anti-Obama billboards superimposed. People forget that there were billboards calling for Obama's lynching and questioning his birth certificate. The only thing that surprised me was the outflowing of support. That is something I never experienced too much of before.
What other reactions have you gotten from previous free speech-themed pieces?
I have gotten similar reactions from my Anti-George Bush and Anti-Fox News billboards as compared to 'Trumpocalypse.' I also have gotten a lot of support. Similar to this situation, only not as much volume.

Being based in Santa Monica, how did you choose Phoenix as its location?
I was in graduate school at ASU and found the billboard through a professor. It was close to the location of my thesis show, and the owners agreed to let me use it. They asked me in January to do one about Trump because they, like millions of Americans, were very upset. The Fox News billboard I did was in Santa Monica. I also have a billboard campaign called 'Got Drought?' which has toured 6 major California cities and is currently up on the I-17 in Phoenix.

Have you made any other art installations about Trump in your city or others?
No. I only wanted to do one Trump piece. I have no intention of making 4 years of Anti-Trump work; it's too depressing. I want to focus on more positive work, like the other side of my Trumpocalypse billboard, which is 'UNITY' in sign language. I have redesigned this image to be even more inclusive and hope to have it up in the form of a mural in Los Angeles in 2018.

The current political climate is so polarized, with people on both sides claiming free speech when criticizing each other—at what point would you say free speech turns into hate speech?
Hate speech is speech that attacks a person or group on the basis of gender, race, religion, ethnicity, sexual orientation, disability or gender. It is speech that poses an imminent danger or has the intention of inciting unlawful action. One thing I learned from this experience is that people don't understand that there is a difference between free speech and hate speech. Hate speech is not free speech, and the only way to remedy hate speech is with more free speech, not silence.


What I made was not 'hate speech' but 'core political speech', which is the most protected form of speech. It is highly guarded because of its purely expressive nature and its importance in a functioning republic.

Photo by: Patrick Allen Taylor
MacKenzie Chase is a journalist currently living and working in Flagstaff, Arizona. The more she learns, the more she realizes that she knows nothing at all