What is Trumpism, Really? 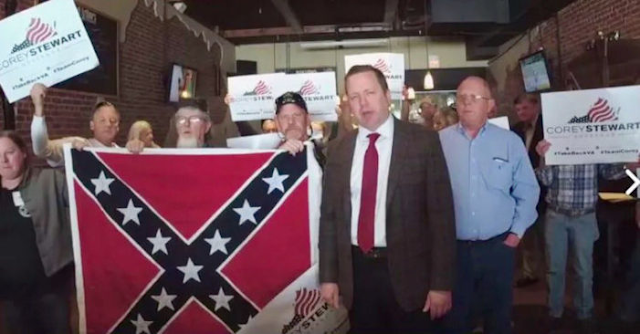 Reprinted with permission from:
thefreecities.com

The Virginia elections — gubernatorial and otherwise — have provoked a lot of hot takes by the Democrats and by the GOP. Lots of congratulations for the former and lots of recriminations for the latter. At the center of it is a simple question: Can you win by embracing Trumpism without embracing Trump? Which is to say, did Ed Gillespie, the former RNC Chair and lobbyist who’s about as swampy as you can get, fail to fully embrace the spirit of Trumpism to be successful? Does anyone understand Trumpism as an actual ideology, a governing ethos, or even a set of loosely held beliefs beyond naked opportunism?

First, some backstory on the very strange Virginia race. While the punditry class of the liberal world has been dutifully re-litigating the 2016 primary and trying to turn every single race into a proxy war between Bernie Sanders and Hillary Clinton, the Democratic primary was much more straightforward. Neither candidate was necessarily “centrist” or “progressive” — they just had different ideas. And credit to Tom Perriello, when he lost he became an active and vocal campaigner for the new governor-elect, Ralph Northam.

Meanwhile, the GOP actually had a full-on proxy war between the Forces of the Confederacy led by Steve Bannon and the Traditional Establishment. Bannon’s chosen candidate was Corey Stewart, a…peculiar figure. Stewart, a native of Minnesota, moved to Virginia and rebranded himself as a fire-breathin’ Confederate Statue-lovin’ culture warrior of the highest order. Why someone from Minnesota gives a single fuck about statues of Robert E Lee, well, you’d have to ask Confederate Corey. So Confederate Corey went up against Swamp Thing Gillespie and a race that was supposed to be easy for Gillespie became a nailbiter that he won by the skin of his teeth.

Moving into the general election, Gillespie decided to tack hard into his ideas of what Trumpism is.

Mostly a lot of frothing at the mouth and roaring. Gillespie tried to run against Trump at the primary, only to run full-bore toward him in the general. He under performed at the former task, and lost — ahem, bigly — at the latter. Within hours of the loss, Trump was decrying Gillespie as a heretical figure in The Church of the Donald, a hypocrite who was using Trump’s brand to excel while not truly believing it. They called it “Trumpism without Trump.” And that, it seems, is the cardinal sin.
Calling Trump the candidate and Trump the president sui generis is basically a cliche at this point. But it is true that he doesn’t appear to have a fixed ideology, something we tend to expect from people who run for President. Bannon has a fixed ideology (it’s insane, but it’s fixed). The Establishment GOP also has one (hypocritical though it may be). But if the allegations against Gillespie’s failure are that he was an apostate in the Church of Trump, we have to determine what the dogma, what the canonical teachings, in the Church of Trump actually are. Is there a way to run a Trumpist campaign without being Donald Trump?

I’ve always maintained that the appeal of Trump — and to a lesser extent Sanders — lies less in actual policy and more in a sort of ephemeral tone and feeling to the campaign. Sure, we all knew Trump wouldn’t bring back the coal jobs. But he at least acknowledged that coal miners’ grievances are real and have merit. He wasn’t going to fix Obamacare, much less repeal and replace it. But he identified that it was flawed and not working at its optimum capacity. So much of our modern politics is rooted in frustration with broken systems and inefficiency. Trump promised to take an axe to DC
bureaucracy, to wheel and deal and build and fix and and and. This wasn’t policy, this wasn’t even really populism. This was abject unabashed nihilism. And it’s something that the GOP has steadily been ginning up in their base for years. “The system is broken. DC is broken. It might not be fixable. We must tear it down and start over.”

You know what? Nihilism is fun. Nihilism is liberating. So is arson. The power to destroy is super alluring! And frankly, destroying things is more easy and more fun than building them. If you passed a guy on the street who had a sledgehammer and he was like “hey, wanna take a swing at this building? No consequences.” We would all do it. If you saw a guy laying bricks and he asked if you wanted a free shot to lay a row…less appealing.

So if Trumpism is just pure nihilism and animal rage, how do you copy those talking points? The talking points of white grievance and economic distress and cultural anxiety? Without actually being the kind of apolitical bomb-thrower that Donald Trump is? This is where the GOP is running into problems. They ran on the idea that government was broken married to the idea that they could fix it. Their voters seemingly don’t want to fix it. They want to storm the barricades and tear it down and eat the rich. There’s the great line in The Big Lebowski, one of the purest nihilist pleasures on this Earth — “Nihilists! Fuck me. I mean, say what you want about the tenets of National Socialism, Dude, at least it’s an ethos.”

At least it’s an ethos. Gillespie and others seek out an ethos in Trump. He has none. He has no ideas. He likes to break things and he likes to yell at people. He’s a destructive force of nature that wants nothing to do with crafting effective policy. How do you embrace that? How do you find the ethos of nihilism, of anti-government, anti-policy, pure wanton destructionism? Maybe there are true believers, the Kochs and the Mercers and the Confederate Coreys of the world. Maybe that’s where Gillespie fucked up. Maybe he believed too strongly that government isn’t an evil machination that must be dug out root and branch. That’s kind of the irony of the Establishment GOP, right? They hate government just until they’re in government, and then it’s pretty sweet.

So the struggle for the GOP will be to run for the offices they want on the basis that they despise them. To use a phrase I’ve used repeatedly, Trump is an arsonist that we hired to housesit for us. The problem is that once the house is on fire, we regret that decision. Now that the GOP has unified control of government, they’re not doing anything they promised. So the argument that government sucks, that government doesn’t work, etc, falls on deaf ears when you’re in the government. It’s like trying to be an atheist evangelical. “Trust me, God is good — I don’t believe in him, but you know, you do — so come to church and give us your money!”

There is no Trumpism. There is no ethos. There is only naked opportunism and promises to destroy, to uproot, to tear down institutions. And now that the GOP is in most of those institutions, I’m not sure how they keep convincing voters. Bannon will find his true believers, his Roy Moores, but the rest of the GOP is going to be stuck struggling to embrace a philosophy that doesn’t exist, that doesn’t know what it is, that’s led by a false prophet spewing nonsense straight from his bile-filled gaping void where his soul should be.

Good luck, GOP. You’ve let this force into your house and it’s now the dominating force of your party’s worldview. I don’t think you even begin to understand it. But this genie isn’t going back in the bottle.

Chris Baugh is originally from Georgia. He received a bachelor's in political science from the University of Georgia and now works in the film and television industry in Los Angeles, CA.